Turkmenistan is a country in Central Asia. It is known for its secretive nature, often referred to as 'Central Asia's Hermit Kingdom,' and hosting major historical stops along the ancient trade route the Silk Road. 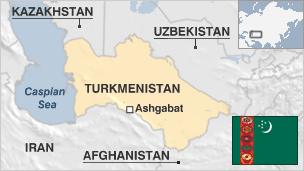 Ashgabat, the capital, was rebuilt in Soviet style in the mid-20th century and later redesigned after the country's independence to feature grand monuments honoring former president Saparmurat Niyazov (Turkmenbashi).

Turkmenistan is a unique and secretive country with large potential for international tourists. Many of its Central Asian cities were main points of trade on the Silk Road, linking Eastern and Western civilizations.

Not only is the country home to some of the world's most exciting and important history, the country is also known for its unbelievable landscape, pristine nature and untouched tourist sites.

Tourists however are generally deterred by the restrictive Visa regime with all countries of the world. This should not however be a deterrent to prospective adventurous tourists who are interested to check out this little-known country.

There are three UNESCO World Heritage Sites in Turkmenistan, they include;

Nisa was an ancient city, located 18km southwest of Ashgabat, the capital of Turkmenistan. Nisa is described by some as one of the first capitals of the Parthians.

Merv, formerly known as Achaemenid Satrapy of Margiana, and later Alexandria and Antiochia in Margiana, was a major oasis city in Central Asia and part of the historical Silk Road, located near today's city of Mary.

Konye-Urgench is a municipality of about 30,000 inhabitants in north-eastern Turkmenistan, just south from its border with Uzbekistan.

It is the site of an ancient town, which contains the unexcavated ruins of the 12th-century capital of Khwarezm. Since 2005, the ruins of Old Urgench have been recognized by UNESCO as a World Heritage Site.

Obtaining a Visa for Turkmenistan is a notoriously difficult task. A large portion of Visa requests are denied without reason or explanation.

The good news is that travellers can immediately re-apply at no charge until the request has been granted.

The Darvaza gas crater, known by locals and tourists as 'the Gate to Hell,' is one of Turkmenistan's most unique and famous sights. It is not however a natural phenomenon and was created while drilling in 1971. Soviet geologists tapped into a cavern filled with natural gas.

After the ground beneath the drilling rig collapsed and began to leak methane into the atmosphere, it was decided to set the site alight. Although it was expected to burn out in only a short period of time, the crater has in fact been burning for almost 50 years.

Azaza, officially the Avaza National Tourist Zone is a special touristic zone in Turkmenistan. It is located on the eastern coast of the Caspian Sea, 12km west of Turkmenbashi city.

Turkmenistan is one of the least-visited countries in the world, with less than 10,000 international tourists said to visit the country annually. The majority of the tourists to the country come from Iran and other neighboring countries.

While tourists from the European Union and North America make up a sizeable percentage of this small number as well.