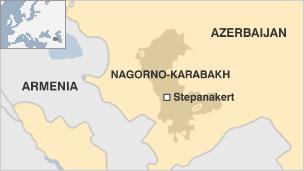 The Republic of Artsakh, also known as, Nagorno-Karabakh, is an Unrecognized Country in the South Caucasus that is internationally recognized as part of Azerbaijan.

The region is predominantly populated by ethnic Armenians and the primary spoken language is Armenian.

The Republic of Artsakh is located in the South Caucasus region. It controls most of the territory of the former Nagorno-Karabakh Autonomous Oblast (Soviet Union) and some of the surrounding area, giving it a border with Armenia to the west. Iran to the south and Azerbaijan to the east.

Since the end of the war in 1994, open conflict is limited. Confrontations have taken place along the borders and tourists have been largely unaffected.

Street crime is low, and locals are very friendly and hospitable towards foreigners. In comparison to western capital cities, the Unrecognized Country’s capital, Stepanakert, is considered very safe.

Top Things to do in Nagorno-Karabakh (Artsakh)

We Are Our Mountains is a large iconic monument north of Stepanakert, the capital city of the Republic of Artsakh (Nagorno-Karabakh).

Shusha, or Shushi, is a city in the disputed region of Nagorno-Karabakh in the South Caucasus. It has been under the control of the unrecognized Republic of Artsakh since its capture in 1992 during the Nagorno-Karabakh War.

A famous battle in Shushi lead to an Armenian tank being hit. After the war, the tank was restored and currently stands as a monument outside.

Askeran is a small town in the Republic of Artsakh. Askeran fortress is situated in the southern suburb of the town. The fortress was built for defense of Shusha. The fortress was widely used during the Russo-Persian War.

Inside the Ministry of Foreign Affairs building in central Stepanakert, there is a museum of state history. When you are waiting for you visa on arrival to be processed, this is a great time to check this out!

Dadivank also Khutavank is an Armenian monastery in the Shahumian Region of the Nagorno-Karabakh Republic. It was built between the 9th and 13th century.

Tigranakert is a ruined Armenian city dating back to the Hellenistic period. It is one of several former cities in the Armenian plateau with the same name, named in honor of the Armenian king Tigranes the Great.

Open air market in Stepanakert where you can get the best take of local food an drink.

Because Azerbaijan considers the territory its own, it has threatened to shoot down any unauthorized planes. As such, the only way to enter the country is on land.

Agdam is a ghost town in Nagorno-Karabakh and the formal capital of its Agdam District. Technically, tourists are forbidden from entering this are without a special permit. However, curious travellers are still known to make their way to the abandoned village.

Why is Artsakh not in the U.N?

In the case of Artsakh, the policy of American and European-aligned countries has been not to recognize the independence of such states.

After the fall of the Soviet Union, the general policy of western countries was to only recognize the independence of Soviet Socialist Republics and not autonomous regions within those republics.

As such, the region of Nagorno-Karabakh (Artsakh) was recognized along the borders of the Azerbaijan Soviet Socialist Republic (today’s Azerbaijan), of which it was a part.

In turn, since the region was part of Soviet Azerbaijan and not Soviet Armenia, western-aligned states have chosen to recognize Azerbaijani sovereignty over the region.

Many other Turkic and ex-Soviet states have also come to the same conclusion for recognizing Azerbaijani sovereignty over the region, however for different historical and political reasons.

How do I enter Artsakh?

Artsakh is easily entered on land through the Republic of Armenia. The easiest way to do so is by flying to Yerevan, the capital of Armenia, and driving to the border from there. The border with Azerbaijan is completely closed and not able to be crossed.

The international airport in Stepanakert has not been in use since the early 1990s and is not an option to enter the country.

Do I need a visa to enter Artsakh?

Citizens of the US, the UK, Canada, Australia, New Zealand, and EU member states are able to easily obtain a visa on arrival in the capital Stepanakert.

Tourists must visit the Ministry of Foreign Affairs building after arrival, conveniently located on the main street in Stepanakert. Staff are extremely polite and you will be finished the entire process in about 15 minutes after arriving.

It should be noted however, that this visa is not in any way connected to the E-Visa for Armenia.

What currency do they use in Artsakh?

The primary currency of Artsakh is the Armenian Dram. However, it also has its own official ‘unrecognized currency’ - the Artsakh Dram. In reality however, this currency is rarely used and the currency used for daily transactions is that of Armenia.

Is Artsakh a country?

Artsakh is an Unrecognized Country. As with all Unrecognized Countries, the nature of their status revolves around the fact that few or no other countries recognize their sovereignty over their claimed territory. This could be for any number of reasons.

The unusual fact in the case of Artsakh is that Armenia also does not recognize the country.

However, Artsakh does in fact have sovereignty over its borders, a government, a currency, a legal system, and a military, all of which is separate to that of Armenia.

How did Artsakh gain independence?

During the fall of the Soviet Union, the region re-emerged as a source of dispute between Armenia and Azerbaijan.

In 1991, a referendum held in the Nagorno-Karabakh Autonomous Oblast (NKAO) and the neighbouring Shahumian region resulted in a declaration of independence based on its right of self-determination.

Large-scale conflict between ethnic Azeris and Armenians led to the 1991–1994 Nagorno-Karabakh War, which left the region in the control of ethnic Armenians.

The result of the war was ultimately a ceasefire, which has left the region in a state of ‘frozen conflict’ and the de facto independence of the Republic of Artsakh.

Who are the people of Artsakh?

The vast majority of the population of Artsakh is made of up ethnic Armenians and belong to the Armenian Apostolic Church. As such, they are closely related to neighboring Armenia.

What language is spoken in Artsakh?

As the people of Artsakh are predominantly ethnic Armenians, the official language of the Unrecognized Country is Armenian.

People in Artsakh primarily speak the Karabakh dialect of Armenian (also known as the Artsakh dialect). It is an ancient Eastern Armenian dialect with a unique phonetic and syntactic structure. It is mainly spoken in Artsakh and also in the southern and northeastern parts of Armenia.

Are there foreign embassies in Artsakh?

Most European and North American countries have diplomatic missions in Yerevan, the capital of Armenia.

Will travelling to Artsakh affect future travel to Azerbaijan?

Simply put, most likely. Azerbaijan considers any entrance into the territory of Nagorno-Karabakh (Artsakh) to be an illegal entry into its territory.

With the above said, The Republic of Artsakh does not stamp nor put a visa in your passport (the visa is on a separate paper). The only evidence in your passport from travel to the region will be entrance your stamp into Armenia.