Dissolution of the Soviet Union

In 1991, one of the biggest changes to global geopolitics occurred. The dissolution of the Soviet Union led to the establishment of many independent states across the region. While it seemed that the world would be a more peaceful place since the Cold War was over, other conflicts still erupted as a result.

History of the Russia-Chechen Conflict

The Chechens in Russia’s North Caucasus region have historically had a complicated relationship with Russia. Just in the last thirty years, they have fought two wars against each other, which led to many casualties and caused economic and other problems for both sides.

The enmity between Russia and Chechnya started a couple centuries before this however. Earlier on, in the second half of the eighteenth century, the Russian Empire sought to extend its power in the North Caucasus region, sending Russian Cossacks there to settle in the territory.

This upset the Chechen and Dagestani people living in the region, who took arms to oppose Russian advances, led by Sufi Islamic mystics (Gokay, 2004). While the Chechen leader Sheikh Mansur was captured, rebellion continued, especially after Russia annexed Georgia in 1802.

Eventually, the rebels were defeated in the second half of the nineteenth century, leading to resettlement and expulsion of many Chechens.

Chechnya During the Russian Revolution

After the February Revolution in 1917, clashes erupted from the Chechen side, and the Chechens again began fighting in the region. The Soviets then intervened and took control of the region, calling it the Terek Soviet Republic. 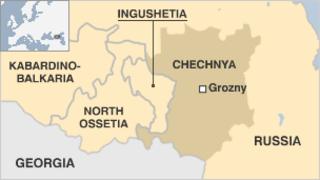 Map of the North Caucasus

The Chechens did not give up either and inflicted many casualties on the Soviets. Their aim was to expel the Soviets and install a theocratic state; the rebels saw this as a religious struggle.

The revolt was finally put down by the Soviets in 1925 when the last rebels were captured and executed. This conflict and defeat exacerbated anti-Russian sentiment in the North Caucasus. These events also showcase how nationalism and the desire for autonomy or even independence was tightly fused with a religious theme.

Until the Second World War, Chechen uprisings and rebellions became common, erupting every few years. However, none of these was as large as the previous ones, or successful.

As Chechens were accused of collaborating with the Germans during World War II, Stalin deported all Chechens to Central Asia, Kazakhstan, and Siberia.

The North Caucus region was “Russified” as many Russian settlers moved here, mosques were closed, and Russian culture promoted in different ways. Deportation became a particularly sensitive point for Chechens, and it is one of the main reasons why they have resented the Russian state for so long.

The 1960s saw the return of the Chechens to their homeland. They still resented Russians, to the extent that thousands of Russians left the North Caucasus in the 1970s. Similarly, Russian attitude towards Chechnya has remained aggressive for many decades, if not centuries.

After the collapse of the USSR, a group of Chechens declared the independence of part of Chechnya, calling it the Chechen Republic of Ichkeria in 1991. They were able to govern themselves with some autonomy, but in 1994, Russian president Boris Yeltsin sent the army to restore constitutional order, starting the First Chechen War (World Peace Foundation, 2015).

Grozny, the capital of Chechnya, was devastated mostly due to air bombardment. The Russian army followed with a ground campaign, leading to a guerrilla war with many casualties.

The war reached a stalemate in 1996; it seemed unfeasible that either side would win the war. Thus, Russian and Chechen leadership negotiated an end to the war through the Khasavyurt Accord, where Russia agreed to withdraw its troops from Chechnya (Sieff, 1999).

The accord notably omitted the issue of Chechen independence, which had sparked the war in the first place. This meant that the main factor leading to the start of the war was not addressed.

During the First Chechen War, Russia suffered many casualties and the war was unpopular. Conversely, many Chechens fled to other towns to avoid conflict. Still, many losses were inflicted.

Grozny, The Capital of Chechnya

Not long after, the Chechen government lost control of part of the territory. Foreign jihadists entered the region and gained power in small localities. This meant the introduction of Wahhabism, a more radical form of Islam, into the region.

Wahhabism in many ways runs contrary to the Sufi Islam traditions predominant in Chechnya. Akhmad Kadyrov, who was then a religious leader in Chechnya, sided with the Russian government in 1998, partly due to their common opposition to Wahhabi groups.

Russia was struck by a terrorist attack which hit four buildings in Moscow and Volgodonsk in 1999. The government and security services accused Chechen rebels of committing the attack. Some people, including Alexander Litvinenko - believed to have been murdered by the Russian government - believe that the bombings were committed by the security service, to justify a war against the Chechens (Walsh, 2004).

Others think that the event was manipulated and used as justification for this. The evidence is not yet compelling. However, this event brought Vladimir Putin into the scene, who was appointed as head of government by then president Boris Yeltsin.

On top of this, in 1999 Shamil Bayasev, leader of one of the more radical factions in Chechnya, raided Dagestan with his army and attempted to take control of it (Womack, 2011).

None of those found guilty of the bombings were ethnic Chechens themselves. Bayasev, responsible for much of the violence committed by radical Chechens, had no connections to the Chechen government, which condemned the attacks. Hence the bombings in particular do not seem like very legitimate claims to have started a war in Chechnya.

Given their alliance, the Chechens, ruled by Kadyrov collaborated with the Russian government in fighting the radical rebels. Media and government called this an anti-terrorist operation.

Bayasev’s forces wanted to declare Dagestan independent, but Russia wanted to stop this. Kadyrov, whose leadership position was in theory mostly religious, thus gave up the quest for independence in choosing to side with Russia. Many people still fought for him. During this conflict, know as the Second Chechen War, military and civilian casualties were high and parts of Chechnya were devastated.

In entering Chechnya and Dagestan, Russia ended the experiment of declared independence that the Republic of Ichkeria had enjoyed for a few years, manifesting Russia’s control over the region.

Russia slowly pulled out as their enemy weakened and let the Chechen militias do their fighting. In 2002, Russia put an end to the war, pulling out its troops. The enemies had already been driven out and were now waging guerrilla warfare, yet Russia’s involvement took on a different approach.

The end of the battle phase of the war resulted in two especially important outcomes. The independent Chechen Republic of Ichkeria was abolished, thus Russia regained control of the North Caucasus, at least officially. On top of this, Russia installed a new government in Chechnya, ruled by its ally Akhmad Kadyrov. This government was of course pro-Russia and thus did not seek to become independent unlike many others in the past.

After Russia ended the battle phase of the Chechen War, the separatists mostly employed sporadic attacks and raids and their presence declined over time. Yet Russia still conducted counterinsurgency operations and air strikes to combat the Islamic Chechen separatists.

The latter carried out terrorist attacks and targeted assassinations both in Chechnya and other parts of Russia. This is what led to the death of Kadyrov in 2004 (Mirovalev, 2014).

The separatists were also responsible for the infamous Beslan hostage incident. They seized a school in the town of Beslan in North Ossetia, taking more than 1,000 hostages, most of whom were children. When the Russian forces intervened, they killed all the insurgents, but in the process more than 300 people also lost their lives.

Events like this did much to further turn the public’s attitude towards the Chechen separatists. Akhmad Kadyrov’s son gained much power in Chechnya after his father’s death and eventually became the president of the region in 2007.

Chechnya as a Part of Russia

In 2009, Moscow declared its anti-terrorist operation in the North Caucasus finished, putting an end to the Second Chechen War. The whole war boosted Putin’s popularity in Russia; he was seen as taking action against a group of people who were harming Russian interests, while also bringing stability to Chechnya.

However, Russia’s abandonment of Chechnya did not make things better. When Russia left, separatist movements had become much weaker; instead, radical Islamist groups were now present in the North Caucasus. Since this was seen as a lesser threat to Moscow than separation, their involvement stopped, leaving everything in the hands of Kadyrov.

Pain, E. (2001). From the First Chechen War Towards the Second. The Brown Journal of