The Annexation of Crimea

More than five years have passed since the status of the Crimean Peninsula changed, a recurring feature throughout its existence.

This last time, it went from being under Ukrainian control, to being a part of Russian territory. How and why this happened, as well as the aftermath of this transition, are important issues to explore.

It was March 2014 and tensions in Ukraine were high after pro-Moscow president Viktor Yanukovych had been recently ousted during the Euromaidan protests in Kiev.

A referendum asking the people of Crimea if they wanted to join Russia was held on March 16, 2014, organized by the Crimean Regional government, led by Sergey Aksyonov (Yuhas, Jalabi, 2014).

Crimeans were given two options; becoming part of the Russian Federation or restoring the 1992 Crimean constitution, staying in Ukraine but with more autonomy (BBC, 2014). The official results said that 96.7 percent of the voters supported re-unification with Russia (Somin, 2014).

The day after the referendum, the Supreme Council of Crimea declared the independence of the Republic of Crimea and the Crimean parliament requested the Russian government to be admitted into the Russian Federation (Harding, Walker, 2014). Putin signed an executive decree, formalizing the transition of Crimea from Ukraine to Russia (Kremlin, 2014).

A Look into Crimea's Past

Crimea was the land of the Crimean Tatars between the 15th and 18th centuries, belonging to the Ottoman Empire.

Beginning n the 18th century, the Russian Empire led by Catherine the Great, conquered the peninsula. Shortly after this event, the region went through cultural and demographic changes that led to its “Russification” (Crimean Tatar Resource Centre).

Crimea remained part of Russia during the beginning years of the the Soviet Union as well, and Crimean Tatars were deported in large numbers by Stalin during World War II. However, in 1954, the Soviet Premier Nikita Khrushchev decided to give Crimea to Ukraine to commemorate the 300-year anniversary of Ukraine’s merger with the Russian Empire.

How Did the Annexation of Crimea Occur?

As mentioned before, the events that took place in Crimea were largely triggered by the Euromaidan Revolution and the overthrow of President Viktor Yanukovych. The protests against Yanukovych were sparked after he turned down an economic and political agreement with the European Union in November 2013.

Instead, Yanukovych chose to make a deal to receive money from Russia (Steinzova, Oliynyk, 2018). People marched in the Maidan Square, angry at the corruption of Ukrainian politicians.

The protests dragged on for months, calling for Yanukovych to resign, and as demands grew stronger - he fled. Leading the parliament to remove him from office and appointing an interim government (Bilash, 2016).

Shortly after Yanukovych was removed from power, Crimeans held rallies to show support for the ex-president, some calling to secede from Ukraine and join Russia. During this time, bands of unmarked soldiers appeared in the region, seizing government buildings. 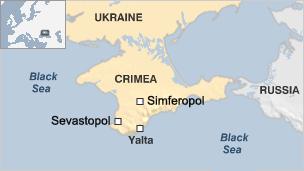 The Russian government denied any involvement, calling these “local self-defense forces” (Taylor, 2014). Putin later confirmed though that these were indeed Russian troops, saying they were necessary to ensure the referendum was conducted peacefully (Russia Today, 2014).

It is worth noting that as Putin claimed, there was no violence or chaos during the process. The referendum was called for by a Crimean government led by pro-Russian Sergey Aksyonov, who took power in 2014 after forming a paramilitary force in the peninsula (Shuster, 2014). The referendum showed landslide support for joining the Russian Federation.

On February 27, the Crimean Supreme Council announced it would hold a referendum on the status of Crimea, which took place less than a month after (Harding, Salem, and Walker, 2014).

The international community claimed that the large presence of Russian military personnel (about 20,000) worked against the fairness of the vote. While there were no widespread allegations of direct use of violence, people might have felt threatened or scared into voting to join Russia.

Western countries have been the ones to put most pressure on Russia. The US and the EU imposed sanctions on Russia shortly after the annexation. These sanctions tackle Russia’s economy and are targeted at several Russian individuals and firms, as well as placing restrictions on trading with Russia.

Over the years, the international community has maintained its approach. Most countries still recognize Crimea as part of Ukraine, while sanctions are still in place. Russia’s economy has weakened partly as a result of this, however there is no sign that the status of Crimea will change again anytime soon.

Why Did Russia Annex Crimea?

Much of this article has described what happened and how it happened surrounding the Crimean referendum and the annexation. Yet it is still not to clear what led to these events, what motivated the Russian government in seizing the peninsula. There are various potential explanations for why this happened.

First, the Russian government has claimed it acted to protect ethnic Russian and citizens in Crimea. It is important to remember that since 1999, Russia has a policy called the Compatriot Policy. Based on this, Russia feels obligated to defend the interests of Russians no matter where they live – treating Russians abroad as their own citizens (Coffey, 2014).

With the revolution in Ukraine and removal of Yanukovych, there was much uncertainty and tensions in many parts of Ukraine. Part of the Crimean population expressed its support for Yanukovych and dissatisfaction with his removal.

Russian Crimeans also grew concerned with the possibility of nationalist, far-right extremists growing stronger in the region like they did in Kiev and Eastern Ukraine. Thus, the Russian government had to interfere in Crimea to protect the citizens and listen to their will (Treisman, 2019).

Given Crimea became stable and not violent after the annexation, unlike Eastern Ukraine (Donbass - Donetsk and Luhansk) for example, Russia's claims have gained more credibility amongst Russians, promoting the narrative that he saved the peninsula from a disaster.

Consequently, some of his most popular times amongst Russians occurred not long after the annexation, when his approval rating sat at 89 percent (Ragozin, 2019). Furthermore, wages in Crimea have increased faster than in other parts of Ukraine, and two thirds of the budget of the regional government comes from federal transfers (Doff, 2019).

Some have signalled the annexation of Crimea as indicative of Russia’s imperial ambitions. Various experts think there is not much to this theory as there have not been any more territorial changes to Russia since the annexation.

For one, the annexation of Crimea surely would not have occurred had Yanukovych stayed in power and Russia and Ukraine had good relations under his mandate. His removal created uncertainty in Ukraine and only then did claims emerge that there was a threat from Ukrainian nationalists for Crimean people.

There is no evidence to suggest the Russian government had been carefully planning this move. It is likely Putin did not expect Yanukovych to fall from power too early, otherwise his loan to the Ukrainian government in late 2013 would not have been of interest.

This leads to another potential explanation for the annexation; that it was improvised. With Yanukovych in power, Russia’s interests and relations with Ukraine were safe. However, when the nationalist revolution led to his removal, there was no guarantee that relations would remain good.

Another important factor is Russia’s naval base in Sevastopol, Crimea. The Black Sea Fleet, comprising over 20,000 Russian troops is stationed there. This base is in a strategic location, providing access to the Black Sea, the Sea of Azor and the Mediterranean Sea.

However, this was in Ukrainian territory, leased by the government to Russia. Under a friendly government like the Yanukovych administration, this agreement was safe.

However, with the lease set to expire in 2017, and while Yanukovych would have likely renewed it, it was possible the new government would not. By annexing Crimea, Russia guaranteed its control of the base, which is now under its territory.

Russia’s annexation also served domestic political interests of the government. Between 2011 and 2013 there were several protests against the Russian government due to its perceived corruption and democratic deficit.

The government was able to stop these and keep its hold on power. However, the protests in Kiev and around Ukraine and the ousting of Yanukovych rang the alarms in Moscow, raising fears of the sentiment spreading leading to its loss of power. Against this, the annexation of Crimea served many purposes.

For one, it enabled Putin to regain popularity in Russia, as mentioned before. His approval rating rose substantially and many Russians supported the action. Crimea holds an historical meaning for many Russians, given the battles they have fought to take that land and the way they lost it to Ukraine during the Soviet Union.

Hence, many believed that it was actually Russian and unfairly given to Ukraine. Such feelings are also backed by the large Russian population in the peninsula. Putin capitalized on this to boost his popularity at a time that seemed very uncertain.

It is also likely that Russia did not anticipate such a negative reaction involving sanctions from the international community. If the decision to annex Crimea was not too premeditated and planned then this makes sense.

A strong propaganda campaign through the media and TV, the Russian government also secured its grip on power through the annexation. The images portrayed that Russia was helping Crimean and bringing stability to the peninsula.

This created a contrast between Crimea, which by joining Russia achieved a level of stability, compared to Eastern Ukraine (Donbass - Donetsk an Luhansk), which has remained in a frozen state. The message was - Moscow can create stability and peace.

Furthermore, it seems that the Russian government had not resolved annexation after some days that their troops were deployed in the peninsula; the referendum was first called for on February 27, and would ask the people if they wanted to gain more autonomy as part of Ukraine.

Pressure from the pro-Russian leaders who saw this as an opportunity to finally become part of Russia while also avoiding the violence probably influenced Russia’s decision to finally annex Crimea.

Added to this, if Russia withdrew from Crimea and the region stayed under Ukrainian control, the latter would have regained control here and might have prosecuted pro-Russian elements and taken a more aggressive stance on Russia (Treisman, 2016).

After the Annexation of Crimea

There seems no end in sight for the annexation of Crimea. Russia controls the territory and considers it to be and integral part of its country. Russia even finished construction of the Kerch Strait Bridge in 2018, connecting Russian mainland to the Crimean Peninsula.

Life under Russia has improved for many Crimeans, although not significantly. Many of the industries such as tourism and trade have been negatively affected because of international sanctions.

However, it seems that many people in Crimea still support the annexation and prefer being part of Russia.

In a survey conducted by the German Center for East European and International Studies in November 2017, 80 percent of Crimeans polled said they would vote the same. Moreover, support by the Russian population has not waned; in February 2019, 62 percent Russians thought annexation was good for country, according to a poll (Goncharov, Volkov, 2019).

It still remains to be seen if conditions will improve for the citizens and minority groups living in Crimea and whether Ukraine, Russia and the international community will find an agreement regarding the status of the region.

As of July 2019, the European Union has stopped granting visas to Russia passport holders who's passports were issued in Crimea.

Brilmayer, L. (2014, March 14). Why the Crimean referendum is illegal. Retrieved June 16, 2019, from https://www.theguardian.com/commentisfree/2014/mar/14/crimean-referendum-illegal-international-law

Coffey, L. (n.d.). What You Need to Know About the War in Ukraine – Interview by Michelle

Masters, J. (2014, March 16). Why the Crimean Referendum Is Illegitimate – Interview by John B. Bellinger. Retrieved June 18, 2019, from https://www.cfr.org/interview/why-crimean-referendum-illegitimate

Somin, I. (2014, March 17). The dubious Crimean referendum on annexation by Russia. Retrieved June 18, 2019, from https://www.washingtonpost.com/news/volokh-conspiracy/wp/2014/03/17/the-dubious-crimean-referendum-on-annexation-by-russia/?noredirect=on&utm_term=.9930d361ac1b