How Unrecognized Countries Export and Engage in International Trade

An Ottoman proverb states “Who takes money today, will have to take orders tomorrow.”

Although unrecognized countries are weakened by their independence wars, the real war to be fought is for international recognition.

It is also common that international powers use the status of unrecognized countries by becoming a necessary financial and political pillar for their development. This generally turns into a form of leverage used against other states.

Through this one-sided dependence, economies of the unrecognized countries become integrated with that of the greater power, and their dreams of independence, recognition and self-governance are called into question by apposing sides.

The politico-legal status and international isolation pushes countries to withdraw into protectionism and / or to be limited to very few trade partners. They have no place in international trade organizations and are therefore subject to the highest tariffs at borders.

Exported goods of unrecognized countries are often labelled under the name of the country to which they are internationally recognized as part of, which creates an intense dependency and an enormous obstacle for their complete independence.

The status of unrecognized countries is strikingly disabling in the field of international trade because their isolation forces them to be dependent on only the powers that recognize them as sovereign states.

This raises the question of the autonomy of unrecognized countries, escaping one dependence by connecting to another.

Transnistria is an unrecognized country that has found it difficult to be financially independent. Its economy is primarily based on Russian external funds (investments and humanitarian assistance).

Since Transnestria declared its independence from Moldova, Moscow has backed the region both financially and militarily. Its economic trend has been negative since 2008, and the survival of the unrecognized country may be in foreign hands.

Expatriate workers, cash remittances as well as the sale of Russian gas are the other sources of the unrecognized country's income.

Coat of Arms of Transnistria at Border

Transnistria, being unrecognised by the international community and bound by trade laws in neighboring Ukraine and Moldova, has been forced to register its businesses in Moldova if it wishes to export products through any of its border. As such, exported goods are labelled as 'made in Moldova.'

However, the value of products exported from Transnistrian companies is almost US$700 million, equivalent to approximately 70% of the unrecognized country's GDP (the GDP of Transnistria is estimated around 1 billion).

Transnistria lacks raw materials, another reason why there is a very low level of diversification of its exported goods.

The economy of the region relies on four industrial plants: the JSC Moldova Steel Works in Ribnita (MSW Ribnita), Tirotex, the Ribnita Cement Plant and the Moldavskaya GRES power plant. Moreover, 95% of these firm’s production is exported. (Kamil Calus, 2013).

The domestic market has been uncertain and the economy is in a vicious circle in which the increasing imports of foreign goods affects the domestic production and impede local entrepreneurship. 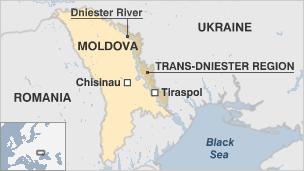 The Case of Abkhazia and South Ossetia

The situation of Abkhazia and South Ossetia with Russia correspond to two concepts in international relations. 'Linkage,' refers to the density of a country’s ties with the West; 'Leverage' denotes a government’s vulnerability to external democratising pressure. (Levitsky and Way, 2010).

In order to strengthen its hegemonic situation and compete economically against the West, Russia uses its influence over unrecognized countries and their internationally recognized states, as leverage to impede their linkage with the West.

Map of the Caucasus Region

Moscow holds a very exclusive relationship with various unrecognized countries including; Transnistria, Abkhazia and South Ossetia. Firstly, it is a fundamental pillar of the economy Abkhazia (80% of Abkhaz imports in 2015-2016 while Abkhazian exports 60% of its production to Russia), and considered as the only pillar of the South Ossetian one (Andre W. M. Gerrits & Max Bader, 2016).

Moreover, Russia grants them with political security. Russia signed an 'Agreement on Friendship, Cooperation, and Mutual Support' with both unrecognized countries only a few weeks after their declared independence, in order to initiate its influence as efficiently as possible.

Abkhazia’s economy has a more stable trend than in Transnistria and in South Ossetia. However, this rather peaceful economic situation is explained by Russia being the 'Trade Patron' of Abkhazia (Gaprindashvili, Tsitsikashvili, Zoidze, Charaia, 2018).

In addition, tourism is an important source of revenue for Abkhazia: in 2018, one million visitors were counted of which 550,000 were actual tourists. This number is far greater than that of Transnistria and South Ossetia combined. This can be explained by the long history of Soviet and Russian tourism to the region.

However, the status of the region prevents it from developing it properly (for example Airbnb announced that they will remove Abkhazia from their website because of its unrecognized status).

Agriculture is also a pillar in the Abkhaz economy (renowned for their citrus, fruit, tobacco, tea and hazelnuts). However, this sector has also been decreasing as they were unable access investment and proper financial resources to expand the industry.

As such, Abkhazia’s GDP in 2018 was around RUB 30.4 billion (about US $450 million) (Statistics Office of Abkhazia, Official Statistic).

Russia is setting up step by step in the economy of Abkhazia, creating such a dependence that the economic systems of the two regions became intertwined.

Scholars Andre W. M. Gerrits & Max Bader explain “Among other things, Abkhazia has adopted Russian technical and commercial standards, and its electricity grid has been united with that of the Russian Federation. In addition, Russian state company Russian Railways controls the rail network of Abkhazia, and other Russian companies oversee the development of Abkhaz sea infrastructure.”

The presence of Russia is both appreciated and criticized: “Local leaders both praise the “big brother” in Moscow and try to demonstrate, but more subtly, keep a critical distance.” (Thomas de Waal 2018).

Russian financial support implies a strong political influence which means a step back for their independence. Georgia has a free trade agreement with Europe is an opportunity for Abkhazia to open up.

Abkhazian Coast on the Black Sea

The EU has taken an interest in a special agreement with Abkhazia. However, the 2008 Georgian-Abkhaz war erased all agreement hope. Abkhazian elite fear the process of “Ossetianization,” mirroring the almost complete international isolation of South Ossetia (Thomas de Waal 2018).

The economic output of South Ossetia was worth only three million euros in 2009, its trade deficit is even bigger than in Abkhazia (Ministry of Foreign Affairs of the Russian Federation).

According to the international crisis group: Russia contributed more than one billion dollars to South Ossetia between 2008 and 2012 in every aspect of the life of the unrecognized country.

Almost all of the imports of South Ossetia are from Russia and its exports are restricted due to the limited natural resources and natural export barried provided by its mountainous geography.

This multifaceted influence of Russia (economically, politically and culturally) raises the question of the status of South Ossetia and whether it will continue to be an unrecognized country or whether it will be further integrated into the Russian Federation.

However, Russian financial aid has decreased recently to Abkhazia and South Ossetia which resulted in an immediate devaluation of the ruble (the Russian ruble is the official money in Abkhazia, South Ossetia and Russia) and therefore an increase in the prices of Russian imports, not affordable for an average citizen of these unrecognised countries.

As such, continued dependence on Russia’s currency became an additional burden for these unrecognised countries.

The Case of Northern Cyprus

Northern Cyprus, officially known at the Turkish Republic of Northern Cyprus (TRNC) is known for its large public sector, and its increasing informal economy.

The main source of revenue of the TRNC is the financial assistance coming from Turkey. As such, the sovereignty of the TRNC over its own territory is limited due to the external power of Turkey and has called into question its status as an unrecognized country.

TRNC’s growth is based on trade (vegetables mainly) to the EU, and especially to the UK (Daria Isachenko, 2012). The Republic of Northern Cyprus could benefit from the South of the Island Agreement with Europe until 1994.

However, the EU and other states have begun to label exports for the unrecgnized country - a decision that has dealt a severe blow to its economy.

In addition, trading activities are only possible only via Turkish ports, which has resulted in a rise in the price of Northern Cyprus’ goods, and a greater dependence on Turkey (Ozdeser and Ozyigit, 2007).

North Cyprus has slowly been integrated into Turkey’s economy, with the Turkish Lira becoming their official currency. Tourism was the second source of revenue of the, but the absence of international flights has gradually destroyed this activity, leaving only the land border crossing from the internationally recognized Republic of Cyprus.

Daria Isachenko (2012), The Making of informal states, state building in Northern Cyprus and Transnestria, from https://link-springer-com.ezproxy.library.ubc.ca/content/pdf/10.1057%2F9780230392069.pdf

Nicu Popescu and Leonid Litra (2012), Transnitria: a bottom up solution from http://www.operationspaix.net/DATA/DOCUMENT/7361~v~Transnitria__A_Bottom-Up_Solution.pdf

Gaprindashvili, Tsitsikashvili, Zoidze, Charaia (2018), One step closer – Georgia, EU integration, and the settlement of the frozen conflicts? From https://www.ecfr.eu/page/-/GRASS_Research_Draft_19.02.2019.pdf

Washington Post (2018), To avoid sanctions, Kremlin goes off the grid from https://www.washingtonpost.com/news/world/wp/2018/11/21/feature/how-russia-avoids-sanctions-and-supports-rebels-in-eastern-ukraine-using-a-financial-system/?noredirect=on

Salih Katircioglu (2010), Trade and growth in a non‐recognized small island state: Evidence from the Turkish republic of Northern Cyprus from https://www.tandfonline.com/doi/pdf/10.3846/jbem.2010.06

Mihály Borsi (2007) Transnestria – an unrecognised country within Moldova from https://www.ceeol.com/search/article-detail?id=257939

Rebecca Chamberlain-Creangã (2006) The “Transnistrian People”: Citizenship and Imaginings of “the State” in an Unrecognized Country from https://muse-jhu-edu.ezproxy.library.ubc.ca/article/561012/pdf

Kamil Całus (2013), An aided economy: the characteristics of the Transnistrian economic model from https://www.osw.waw.pl/sites/default/files/commentary_108.pdf