Dagestan, officially the Republic of Dagestan, is a federal subject of Russia, located in the North Caucasus region. Its capital and largest city is Makhachkala, is located on the Caspian Sea coast, north of the south Caucasus country of Azerbaijan. 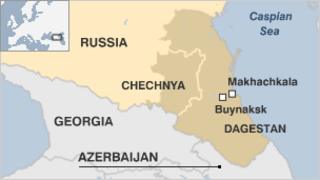 The Russian republic is the most diverse region of Russian and is home to dozens of distinct ethnic groups and dozens of local and regional languages.

Dagestan is generally off-the-beaten-path for most Western tourists. The region made headlines after the fall of the Soviet Union and has been looked at poorly by Western nations ever since.

In the last decade however, the region has opened up and safety has drastically increased. As such, adventurous tourists from across the globe are able to see this extremely diverse and historical region for themselves.

Not only is the region home to some of the most beautiful landscape in all of Russia, but it is also home to some of its most exciting history. Derbent, a city in Dagestan, has had its old-city recognized as a UNESCO World Heritage Site.

The current flag of Dagestan was formally adopted in 1994. It features three horizontal colors each representing a part of Dagestani heritage. The green part of the flag represents Islam, the blue represents the Caspian Sea in which Dagestan borders, and the red for courage and fidelity of the Dagestani people.

As mentioned above, Dagestan is the most diverse region in Russia and is home to dozens of ethnic groups and languages. Many of these groups also have their own flags and status' recognized in the Republic of Dagestan. Such groups include; the Kumyk, the Lak, Nogai and Avar peoples.