South Ossetia is an unrecognized country and post-Soviet 'frozen conflict zone.' It is located deep in the Caucasus Mountains and internationally recognized as part of neighbouring Georgia.

The country is the national home of the Ossetian people, an Iranian ethnic group of the Caucasus Mountains, who are said to be descendants of the 'Alan' people.

South Ossetia is the true definition of an off-the-beaten-path destination - and here's why!

Unlike Abkhazia, South Ossetia has no open border crossing with Georgia. In fact, the only way leading in and out of the country is through a single road leading from North Ossetia in Russia through the Caucasus Mountains.

This has created a physical barrier when trying to enter the landlocked territory. In addition, like most other unrecognized countries, South Ossetia does not have a functioning international airport and cannot be accessed by air either.

In addition to its off-the-beaten-path topography, South Ossetia, unlike other disputed regions in the area, lacks tourism from Russian citizens. Abkhazia, Transnistria and Crimea on the other hand, all benefit from relatively high levels of tourism from Russia.

For all of these reasons, South Ossetia is probably the least-visited of all of our destinations!

2) Ossetia is a Divided Nation 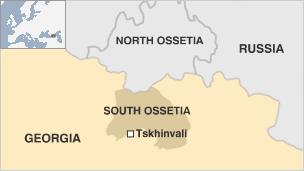 North Ossetia, is a republic in the Russian Federation, while South Ossetia (internationally recognized as part of Georgia) is an unrecognized country.

As such, Ossetian nationalism lead to a struggle for independence. This independence finally culminated during the 2008 Russo-Georgia War, leading to the de facto independence of South Ossetia.

South Ossetia has stated its plans to join the Russian Federation in the future in order to unite all Ossetians again under one flag, however this time - the Russian one.

Although, at this point in time, South Ossetia remains an unrecognized country and is not officially part of or claimed by Russia.

The Caucasus Mountains are world famous for their immense natural beauty, and South Ossetia is the best example of that. The Caucasus region, rich in culture and number of ethnic groups, is one of the most diverse regions in the world.

Because of South Ossetia's remote location in the mountains, it is definitely one of the best places to get a true and authentic taste of the Caucasus region and its vast mountain ranges.

The people of Ossetia are said to be descendants of the 'Alans' - hence the term 'North Ossetia-Alania.' The Ossetians are a unique ethnic group of the Caucasus, speaking an Indo-European language surrounded by Caucasian ethnolinguistic groups.

The Alans were an Iranian nomadic people of antiquity. Alania was a medieval kingdom that flourished in the North Caucasus region, roughly in the location of Circassia and modern North Ossetia–Alania, from its independence from the Khazars in the late 9th century until its destruction by the Mongol invasion in 1238–39.

As the Ossetian people have different historical roots than other ethnic groups in the region, the culture and cuisine of the unrecognized country are also quite unique to the region.

Although, over the course of their shared history, their cuisine has also absorbed aspects of both Russian and Georgian cuisines.

Ossetian cuisine is known to be filled with savoury and traditional meats, pies, cheeses and for those who like to try everything when travelling - even traditional alcoholic beverages.